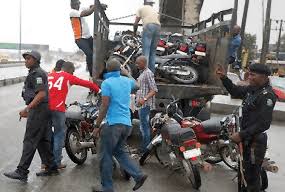 Lagos has embark on clampdown of Okada riders in Lekki, and from there to other part of the state.

The Lagos State Task Force on Monday, embarked on a serious clampdown of commercial motorcyclists, otherwise known as Okada riders, on the Lekki axis.

This exercise might be connected to the outrage that greeted the killing and burning of a young man, simply identified as David by suspected motorcyclists in the Admiralty area of Lekki, Lagos.

Gawat in the statement said that a total number of 123 Okada riders have so far been arrested during the special operation by the task force, noting that the operation will continue tomorrow.

What the Lagos State Governor’s aide is saying
Gawat in his tweet post said, ‘’The Lagos State Task Force embarked on a serious clampdown on Okada Riders on the Lekki axis today, the total number of 123 have been arrested so far. This operation will continue tomorrow.’’

Recall that a few days ago, a sound engineer, Sunday David, was lynched and burnt to death by a mob of suspected Okada riders over an alleged N100 transport fare dispute in Lekki.
The incident coincided with the Sokoto mob attack that killed a Shehu Shagari College of Education student, Deborah Emmanuel, over alleged blasphemy.
There were reports that the deceased (David) and his friend had contracted a rider to take them to a place at Lekki, after closing from work at a nightclub where they sang.
A minor argument was said to have ensued between the rider and his passengers which eventually resulted in a free for all, with more Okada riders joining with sticks and other dangerous weapons.
David was said to have become unconscious and fell on the ground with his body set on fire before help could come his way.

Previous Opinion : God save us from Okadariders as daily prayer point
Next 2023: Why I want to be president — Hayatu-deen