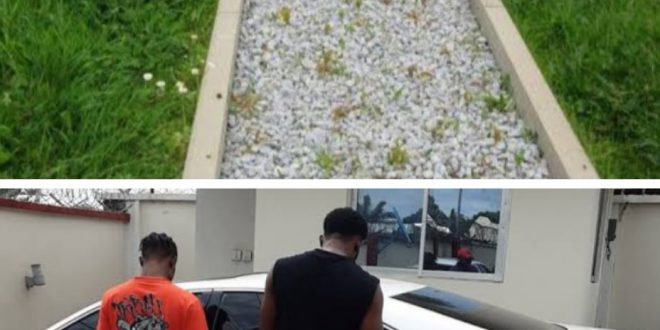 2 Yahoo boys arrested invoking to have sex with dead’s spirit !

Two suspected yahoo boys have been arrested in Akure, the ondo state capital while allegedly invoking the spirit of late Mrs Iyabo Omokri, the General overseer, Greater Works ministry (House of Prayers and Praises for All Nations (HOPPFAN) who had died for over ten years ago.

The incident occurred around 1a.m in the midnight around the church premises at Sijuwade area, Akure, where the deceased was buried as fear gripped residents of Sijuwade area who could not sleep again after the incident.

It was gathered that the two Yahoo boys were caught when they were saying incantations to raise the dead cleric with the intention of sleeping with her.

Luck however ran against the suspects as the security guard in the church arrested them.

One of the Yahoo boys ran away but the other one was not allowed to escape and was later handed over to the police at nearby Ala police station.

The incident occurred but the church doesn’t want the matter blown out by the press.

He said: “Yes, it happened actually but it is a case that had been well-handled, we don’t want to publicised it. We have involved the leadership of the church and they said they didn’t want to go further on it.”