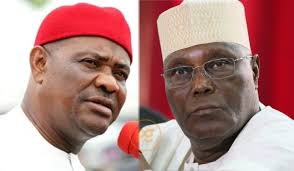 Wike, has expressed surprise over the suit, said to have been filed at the Federal High Court, Abuja, described the suit as the handiwork of mischief makers who merely want to use him to score cheap political goals.

While stating that, “I don’t know the lawyers”, Wike said: “Am I a kid to be filing a suit at this time. I had 14 days within which to file any suit. I didn’t, then is it two months after I will file a suit?”

The news rumour mills have it rolling that he has gone to court to challenge the emergence of Atiku Abubakar as the presidential candidate of the Peoples Democratic Party (PDP), Governor Nyesom Wike of Rivers State, has disowned the move, saying he was neither aware no approved of it.

Reports (YOUNEWS, not included) had emerged on Thursday that Wike had dragged the PDP to court seeking the removal of Atiku as the candidate of the PDP in next year’s presidential poll.

According to the purported suit marked: FHC/ABJ/CS/782/2022, Wike and a PDP chieftain, Newgent Ekamon, are listed as the plaintiffs. In the originating summons, the PDP is listed as the first respondent while the Independent National Electoral Commission is the 2nd respondent. Tambuwal and Atiku are listed as the 3rd and 4th respondents respectively.

The plaintiffs were said to have hinged their claims on the grounds that the PDP primary conferred undue advantage on Atiku which aided his emergence as the candidate of the PDP in the May 28 and 29 primary.

But the Rivers State governor on Friday, denied ever knowing the lawyers who filed the suit nor commissioned them in the first instance.

He also recalled that: “Just a few days ago, they came up with the claim that I ordered my chief security officer to pull down PDP’s flag in my office.

“This is all propaganda. Some people are trying to use me to win election.”

Meanwhile, he has threatened legal action against the publication of the suit as he has nothing to do with it.

The PDP had declared Atiku winner of the presidential primary election having scored 371 votes.

Wike was beaten to a second place with 237 votes in the chase for the PDP presidential ticket for next year’s presidential election. He also lost out in the contest for the running mate of the ticket.

Although, it is believed that Wike is not happy with the two outcomes, and had since been making suggestive statements depicting him as being at war with the former Vice President.