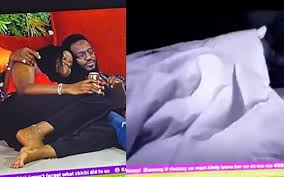 Big Brother Naija housemate, Khalid who was evicted from the show on Sunday has cleared the air on his relationship status with fellow housemate, Daniella.It is beyond the under duvet rocking and rolling, he has assured.

Khalid when asked to explain the Daniella situation told Ebuka that his relationship with her is serious even though he didn’t expect it was going to happen while in the house.

He said, “It was quick, I knew I said I didn’t want a relationship but it hit me like a bus. It is serious.”