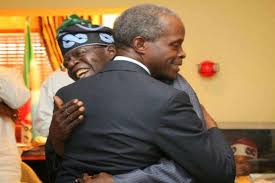 Lie has been put to the story making rounds that
exclusion of Vice Presdent Osinbajo, who lost the APC presidential primary to Bola Tinubu, from the campaign list is out of vendatta and lost love ,after what some called ‘ painful betrayal’

A spokesperson of the Presidential Council, Festus Keyamo, said President Muhammadu Buhari directed the party to exclude Vice President Yemi and the Secretary to the Government of the Federation (SGF), Boss Mustapha from the party’s Presidential Campaign Council.

Festus Keyamo disclosed this in a statement on Saturday in Abuja.

The list of the 422-member council was unveiled in Abuja on Friday night by its secretary, James Faleke.

Mr. Keyamo, who is also the Minister of State for Labour and Employment, said the president requested that they be exempted to enable them to concentrate on governance.

The vice president was a political ally of Mr. Tinubu.

He had served the latter as Attorney General and Commissioner for Justice when he was Lagos State governor.

Mr. Tinubu is widely believed to have nominated Mr. Osinbajo as the APC vice presidential candidate in 2015.

“As a responsible Party and Government, all the key functionaries of government cannot abandon their positions for electioneering campaigns.”

Read the full statement
Our attention has been drawn to some stories making the rounds that there may be something amiss within the family of the All Progressives Congress (APC) as the name of our own revered and respected Vice-President, Professor Yemi Osinbajo, SAN, GCON, is not included in the list of the Tinubu/Shettima Presidential Campaign Council.

Nothing can be farther from the facts. For the avoidance of doubt, President Muhammad Buhari, GCFR, is the Chairman of the Campaign Council.

As a result, Mr. President has SPECIFICALLY directed that the Vice-President and the Secretary to the Government of the Federation, Mr. Boss Mustapha should be left out of the Campaign Council to concentrate on the governance of the country and administration of Government.

As a responsible Party and Government, all the key functionaries of government cannot abandon their positions for electioneering campaigns.

APC have also indicated that the list is not sacrosanct as there may be periodic reviews of it as circumstances dictate.

Previous Wike boasts : I get offers regularly, they all know my worth on 2023 poll
Next Wike still in pains over PDP primaries, reveals Ayu got N1b bribe from Atiku