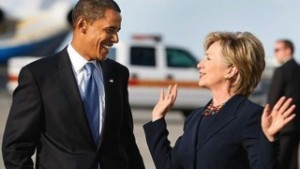 President Barack Obama has said he will campaign with Democratic presidential candidate, Hillary Clinton, for the first time at a rally in North Carolina, her campaign said on Wednesday.
The campaign said in a statement that the duo will discuss building on the progress made and their vision for an America during the rally in Charlotte coming up in July 5.
Obama endorsed Clinton this month after she won enough delegates to secure the party’s presidential nomination, but had yet to actively campaign for her.
Meanwhile, an earlier planned appearance was canceled in the wake of the terrorist attack in Orlando, Florida that claimed 49 victims.
Clinton is expected to face Republican Donald Trump in US presidential election in November and Obama has stressed the importance of keeping a Democrat in the White House to continue his policies.
Clinton has had a strong lead in most recent opinion surveys.
However, a poll by Quinnipiac University on Thursday found Clinton in a dead heat with 42 per cent support for Clinton to 40 per cent to Trump.
Voters told the survey they believed neither candidate would be a good president.
dpa/NAN.